I’ve been involved with web hosting and design for the past 20 years; from hand-coding html, to frames(remember Netscape2.0???), to style sheets (CSS, JAVA), to WordPress, Joomla & MySQL. I host 20 websites and email products on an Apache Linux server. I am proud to say I was among the FIRST to put live TV election results simultaneously on the internet. See Page from WIBWTV and the early  DCM newsroom system(UNIX). 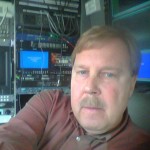 ASSOCIATIONS:
Crime Stoppers of Greater Topeka Board of Directors(1997-2013)

Scan barcode to add me to your contacts: